MARS MUSCLES IN ON THE ACTION! 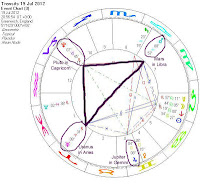 Mars joins in the fun over the next week when he forms part of a cardinal T-square with Pluto and Uranus. A T-square in the cardinal signs is a tense, dynamic configuration which is very impatient and demands action and change. The recent weather patterns have certainly been a reflection of the intense, clashing, turbulent energy of Pluto and Uranus coming up against each other! It has been bizarre to say the least, with flooding, forest fires, crazy storms, earthquakes, volcano eruptions, tornadoes, extreme heat waves and resulting power outages – everything one might expect when these two powerful planets do battle in the heavens!

The pressure has been building in recent times and we are getting close to boiling point, socially, politically, environmentally and personally. Much of the world is experiencing chaos; the world economy is turbulent to say the least, banks are being interrogated and their greed exposed, while protests and revolutions in many countries are proof of people’s discontent and unrest. I remember reading once that people tend to make changes only when things have become truly unbearable, and it seems like that time has come for this planet. The atmosphere is heavy indeed, and only a good storm will clear the air. Things simply cannot stay as they are and the changes are coming hard and fast, regardless of how much some of the world’s population would like to live in blissful ignorance.

Now we have Mars, the God of War joining the battle! One thing I will say however is that Mars is in his opposite sign of Libra, which isn’t the most aggressive place for him to be; passive-aggressive is more like it! Libra’s symbol is the scales which stand for balance and harmony, so while Mars is here he is likely to want to fight for equality and justice. When you combine the energies of Mars and Pluto you get deep-seated anger, power struggles, fanatical assertion of will and superhuman force, and when you mix Mars and Uranus you get fighting for freedom, aggressive eruptions, sudden outbursts and overreactions, and violent rebellion. Jupiter, the planet of expansion and growth, is also in on the act which will increase and magnify communication about philosophical and moral issues. This will only add fuel to an already raging fire!  Put all of this together and who knows what we might have ahead of us in the next week or so!

The energy of the T-square is building now, and will continue to until Mars squares Pluto exactly on Tuesday 17 July and opposes Uranus on Thursday 19 July. After that the energy will wane. It doesn’t exactly fill me with much hope of this crazy weather letting up, that’s for sure! On a personal level we must be very careful how we interact with people during this time, although it could be a perfect opportunity for some proverbial air-clearing! On global level, all will be revealed in the fullness of time!