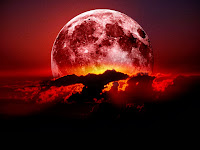 This is an incredibly potent Full Moon as not only is it following one of the most powerful New Moons of the year but it is also a partial Lunar Eclipse. Eclipses make Full Moons even more intense and tend to have far reaching effects on our lives which means that the impact could occur anywhere from 6 months to 2 years after the Eclipse itself. Lunar Eclipses represent major endings, closure, letting go and tend to signify the end of a chapter of our lives. They are an extreme version of a Full Moon, when something that has been building for some time reaches a climax and we have no choice but to face up to it and let go. They create space for the Solar Eclipse that follows two weeks later which is a time of a major birth of something new and a significant fresh start. When one door closes another opens! There is definitely a sense that this is the end of a chapter of our lives and that another one is about to start. This Moon is very much focused on our role within relationships and the balance between the need to be ourselves and the need to be involved with others. Mars and Venus, the cosmic lovers, are the stars of the show here as they are the rulers of the Moon and Sun and are also forming some quite significant aspects to other planets. Added to which Jupiter, the largest planet, is greatly exaggerating the effect the Full Moon will have on our emotions, so we can expect whatever happens during this moon to be quite big!

The Moon is full in energetic, forthright and assertive Aries and is sitting directly opposite the Sun in gentle, peace loving and diplomatic Libra. The key to the Full Moon is finding a balance between the energy of the two signs. When it comes to Aries and Libra we must find the balance between a healthy sense of self (Aries) and the urge to relate to others and take their needs into consideration (Libra). Aries cries out “What about me?” while Libra says “What about us?”. The motto for Aries is “I am” while the Libra motto is “I balance” and a relationship between two people is indeed a delicate balance between their individual needs and journeys. It is very important that we do give ourself enough self-love because it is only when we love ourselves that we are able to truly give and accept love from others. A little bit of Aries isn't such a bad thing as it teaches us to assert ourselves and make sure our needs are met, but we just have to make sure that it doesn't spill over into being so self-absorbed that we don't consider the needs of others. Too much Libra however means that we think so much about the other person that we lose ourselves in the relationship and neglect our own needs, straying off our individual path. Somewhere in the middle of the two we find the answer and the way. The energy of the Aries Moon could bring things to a head as we have to contend with some quite strong, raw emotions which could potentially burst out in quite an inappropriate manner. There is an impulsiveness to Aries as he tends to act first and think later! Again, we must take a leaf out of Libra's book and make sure we think of others feelings before we speak.

The ruler of this Aries Moon is Mars, the warrior or animus, who is currently residing in earthy, humble and organised Virgo, indicating that it is a good time to put our energy into organising ourselves and helping others, such is the Virgo way! Mars is sitting directly opposite Neptune during this Full Moon which could manifest in a variety of ways. The usually direct, active, aggressive energy of Mars could be quelled or diffused somewhat by Neptune's more elusive, free flowing energy, leaving us a bit confused as to what direction we should take. We could find that we don't have as much energy as usual, to the point where we could even feel quite listless and depressed. We may not be exactly sure of how to assert ourselves and anger has the potential to manifest as passive aggression or to somehow be misdirected. We may find ourselves a bit confused, disorganised and unclear as how to proceed. The key to this aspect is to allow our intuition to guide our actions and remember that by hurting another human being we also hurt ourselves. Neptune in Pisces reminds us that we are all one and the combination of Mars and Neptune holds the potential for “inspired action” or “channelled energy”. Above all I think that it is important to consider other people's feelings before we unleash our emotions, frustration or anger on them. We are all in this together and we must remember that. We are not as separate as we think.

Venus, the goddess of love and beauty and the ruler of the Libran Sun, is forming a lovely, flowing aspect to Uranus in Aries which holds the promise of some unexpected surprises in the realms of our relationships. Uranus is very unpredictable in nature and like to shake things up, challenging the status quo. He hates stagnation or ruts! In Aries he demands that we have the freedom to be ourselves and could cause some unexpected shocks or surprises. In positive aspect to Venus he could well breathe fresh air into our relationships, adding a certain spark and bringing much needed changes to the way we relate. We may find it easier than usual to be true to ourselves and assert our individuality in our relationships with others. This is definitely a very dynamic, exciting aspect, so expect the unexpected and don't be afraid to be yourself! Venus is also forming a challenging aspect to Chiron, the wounded healer, which could mean that someone or something could be a trigger of pain in some way, possibly bringing up old, buried memories, insecurities and pain that we would rather not face. Instead of blindly reacting to it, however, it would be far better to see it as a gift, helping us to bring old pain up to the forefront of our consciousness to be examined, understood and healed with kindness and compassion. Luckily Mercury and Jupiter are forming a positive aspect to each other in the Water signs which will help us see the bigger picture and to talk about our feelings as well as gaining considerable insight into where they stem from.

Jupiter is currently in Cancer, the sign of home, family and the roots of our emotional patterns. He is forming a challenging aspect to both the Sun and the Moon and this has the potential to greatly exaggerate and expand the effect the Moon has on our emotions. In Cancer he will bring family concerns to the forefront, highlighting how our family life and experiences in childhood have had an impact both on the person we are and who we are becoming. This could be a pivotal moment as the Moon represents the past and the Sun shows where and what we are moving towards while Jupiter is sitting smack bang in the middle of the two of them, challenging us to look at the bigger picture and understand how all that has come before has created what we face now. Jupiter represents wisdom gained through experience and his aim is to help us grow on an emotional level; to move beyond the emotional habits and patterns that are no longer appropriate and to find a new way of coping with life and our relationships. Jupiter in Cancer could be described as “wealth of emotion” and as he is such a important part of this Full Moon we should be prepared for some fairly big emotions to rise up over the next few days!

This Moon definitely has the potential to bring up some pretty raw and unfiltered emotions as it is in the sign of Aries, the first sign of the zodiac who hasn't yet learned to hide what he is feeling! It is important to channel any strong emotions that may come to the surface into some kind of healthy outlet rather than unleashing them onto those close to us without a thought. Aries is “Act first, think later” kind of energy so it is really important to balance it out with Libra's tendency take other people's feelings into consideration. The Lunar Eclipse adds far more power to this Moon as it represents the end of a chapter and a chance to release the past and move forward. In the meantime Pluto and Uranus are inching towards their fourth exact square on November 1st so the tension is building as we are forced to break down yet more outworn patterns and eliminate anything that isn't working in our lives. Anything that does pass away at this time is obviously no longer serving us, so better to let go with grace. Pluto and Uranus don't take away anything that we still need, only that which is holding us back from standing in our truth with integrity. As this Moon reaches its climax anything that is bothering us or needs to change will probably be so glaringly obvious that we will have no choice but to face it and let it go. Whatever passes away now is merely creating space that will be filled as the Solar Eclipse on November 3rd ushers in a new chapter of our lives.