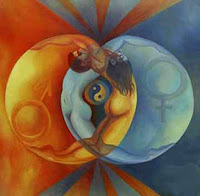 This is certainly not your regular, run of the mill Full Moon, that’s for sure! It is a Supermoon and a Total Lunar Eclipse. Supermoons are closer to earth than normal moons, meaning that they have a much stronger effect on us. Lunar Eclipse herald change, especially in the realm of our relationships, and none more so than this one, as it is occurring on the relationship axis of Aries and Libra. There is an element of crisis attached to Lunar Eclipses, whereby we become aware of a great need or want, as well as a strong realisation of what might need to change in our lives. Whatever area of our life where we might be experiencing a feeling of discontent, or lack, is likely to come to the forefront of our consciousness at this time, and probably with a considerable sense of urgency. It will be hard to ignore. This is a time when one chapter is ending and another beginning, although it may take a while for it to become apparent what exactly it is. Change can of course be unsettling for us humans, but it is also absolutely necessary for growth. We have a chance here to let go of old patterns and take a massive step forward in our evolution, so it is important to be brave and not resist the tides of change!

During this Full Moon the Moon is in brave, instinctual and assertive Aries sitting directly opposite the Sun in fair-minded, diplomatic and peaceful Libra. As I said, this is the relationship axis. The Nodes of the Moon have been in Aries and Libra for the past couple of years, signifying a collective need to focus on finding balance and equality within our relationships. This Full Moon Eclipse will make it glaringly obvious where any problems lie within our relationships and where there might be an imbalance of the masculine and feminine principles in general. Aries is concerned with Self, while Libra is concerned with Other. On the positive side of things this brings a healthy dose of self-love (Aries), whereby each partner takes care of their own needs as well as listening to the needs of the other (Libra). On the other side of things it can mean only thinking of self (Aries) at the expense of the relationship (Libra). Relationships need to be a healthy balance between healthy assertion of our own needs and a consideration of what is needed to maintain a healthy relationship.

The Nodes of the Moon are being activated by this Eclipse, which means that we have the opportunity to take a giant step forward in our evolution, specifically in the realm of our relationships. Aries brings up a strong need for us to understand who we are and what we are here for, while Libra wants us to find a way to relate so that both partners are truly equal in every way. Obviously we all have our individual paths and calling in life, but when we enter into relationship we have signed an invisible contract that means that we now have another person walking along the path with us, so we need to make sure we bear them in mind before we make decisions that might affect them. Aries doesn’t hold back what he’s thinking or feeling and can be quite aggressive in the extreme, so don’t be surprised if this Full Moon brings up some quite heated, instinctual and even primal emotions. Any grievances we may have been holding onto could come spilling out in a somewhat irrational manner, which could upset the apple basket somewhat! Better out than in, however. It really is best to express what might be bothering us rather than letting it fester and create a divide that will only grow with time. Ideally it is best to find a way to say what we need to in a peaceful, open hearted way, because “attack and defend” is never really the way to go!

Mercury is also retrograde in Libra at the moment, adding to the mix. I will list the dates at the end of this post. Obviously the usual rules apply and we should be aware that miscommunications and misunderstandings can easily occur as well as travel plans and technology failing us in dramatic ways! Remember to maintain a sense of humour! However, there is more to the picture, as Mercury’s retrospective action gives us a chance to go back over things and rethink, or review. Libra rules relationships, equality, justice, harmony and peace. As such, we may find ourselves thinking about past relationships and realising things that we hadn’t considered before. We may be able to see our patterns more clearly; how the past has shaped them and how they repeat themselves. History is a great teacher! As Libra likes things to be fair and just, we may have a rethink about our current situation and become more aware of what isn’t fair somehow. This could apply to our relationships, our work, our living situation or the state of the world even. The Full Moon could well bring any feelings of injustice to a head, as this eclipse does make us all the more aware of what areas of our lives are out of whack and need to change.

The good news is that Saturn is forming a positive aspect to this Moon, which should help us stay grounded and a bit more in control. Saturn just left Scorpio and the last couple of weeks that he spent in the final degree of Scorpio brought a lot up for many. It was Saturn in Scorpio at its most intense and would have brought up fear, darkness and anything that we might prefer to brush under the carpet because it’s too painful to face. Our shadows came up to meet us and it was a difficult time for many. On the 17th of September, however, Saturn moved into Sagittarius, and so we are entering a new chapter, just to compound the sense of beginnings and endings that Eclipse season brings. Sagittarius is the sign of growth and expansion and Saturn in this optimistic and forward moving sign will make us think before we leap and make some realistic decisions based on common sense. If we find ourselves being held back or limited in any way it is probably for good reason that will reveal itself in good time.

Saturn could teach us that there is actually a certain freedom (Sagittarius) to responsibility and commitment (Saturn), although it wouldn’t necessarily seem so! Our beliefs and faith could become more defined and concrete during this time and we could gain a greater understanding of where we fit in to this universe of ours.  This combination could have us questioning organised religion more than ever, while at the same time being drawn back to the more ancient, traditional forms of spirituality, such as the old religions and their rituals. We might find ourselves taking a take a more disciplined approach to spirituality and working hard to develop a more concrete relationship with our higher selves.  With commitment and discipline we can develop our intuition even further. This is a great time to seek a mentor or enter into some form of higher learning. This energy is very different to Saturn in Scorpio, that’s for sure! The focus has shifted.

The Sabian symbol for the Moon at 5° Aries is “A triangle with wings”. This holds the promise of us being able to transcend our current limitations and rise up to a new level of existence, both individually and collectively. The triangle is a symbol of the divine, showing how the union of male and female can create another entity in the form of the relationship itself, or indeed another being. Also, what might be possible if we manage to truly find a balance between the masculine and feminine; what beautiful third entity might that create? This Eclipse certainly has the potential to take us onto a new dimension, which is very exciting indeed! The Sabian Symbol for the midpoint between the Sun and Moon is very interesting and pertinent on a global level. “Indians on the warpath. While some men row a well-filled canoe, others in it perform a war dance.” Dane Rudyar says that this symbol “suggests that AGGRESSIVENESS may be a necessary ingredient in the activation of the potential of growth inherent in any social group.” It is quite possible that this Full Moon Eclipse could bring things to a head, but with good reason, as things most definitely need to change in this world of ours, including people’s attitudes. The Aries aggressiveness can be used to shift things in the right direction and help us rise up to a new level. Sometimes we have to fight (Aries) for peace (Libra).

The Symbol for the Sun at 5° Libra is “A man revealing to his students the foundation of an inner knowledge upon which a “New World” could be built”. This also brings the promise of a new way of being. These Eclipses certainly bring the sense of a major shift in consciousness and the beginning of a new chapter, which is very much needed at the moment, given the state of the world. It feels very much like we are at a turning point, when the principles of love and compassion need to lead the way and we let go of our patterns of greed and fear. A new way of being is being born and we really need to embrace it. Let’s find that beautiful balance between our inner Masculine and Feminine and honour our needs (Aries) as well as the needs of others (Libra).  I will end with one last Sabian symbol, as they are really speaking to me for this particular Moon! It is the symbol of Mars, the ruler of this Full Moon Eclipse, at 2° Virgo. “A large white cross dominates the landscape.” Hmmmm. This is a reminder that we must rise above our “ego-subjectivity” so that “compassion and understanding may rise from the depth of the innermost being”. These symbols are telling a story. This is a time to put ourselves in the shoes of others and truly open our hearts. Then we will be able to rise up to the next level.